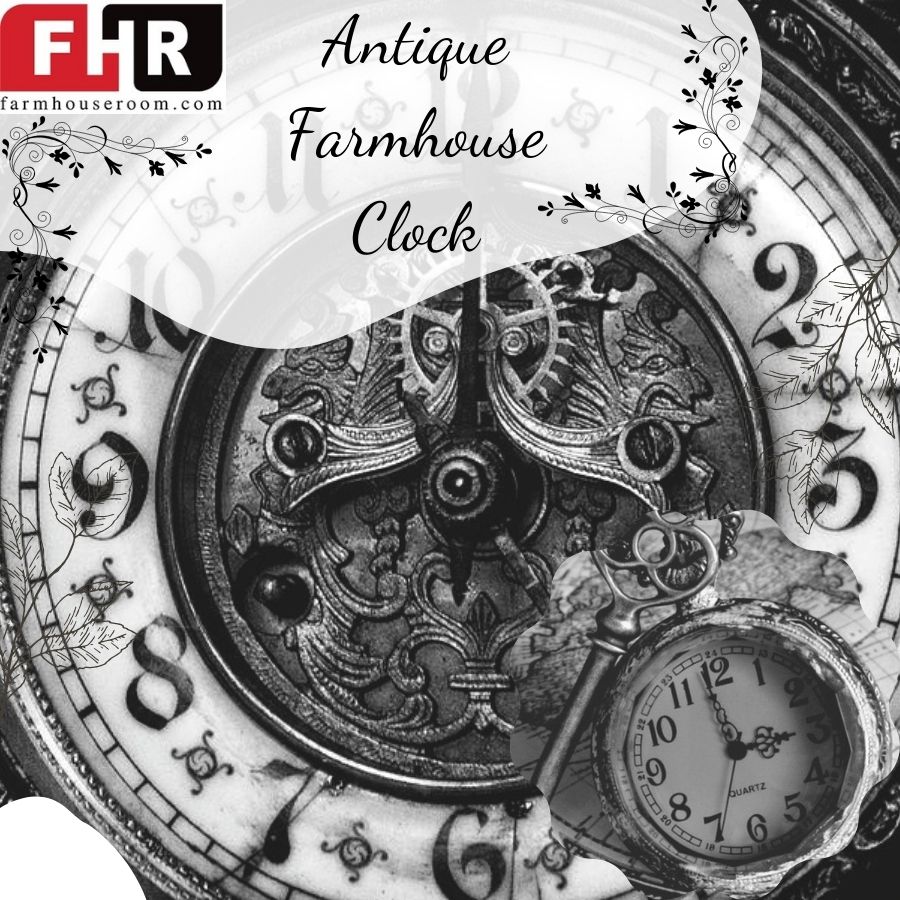 One of the oldest valuables is the clock. Every watch has a long shelf life and that’s why it’s a testament to history. Not only does it show the culture of each country in different periods, but it is also a testament to the creation and essence of human art. Let’s learn about the antique farmhouse clock with Farmhouse Rooms in this article to find out the hidden beauty of these perennial timekeepers.

The Earliest Civilizations And The First Clocks

Although the movement of the sun has always acted as a natural indicator of the passage of time, it has only been relatively recently in human history that humans have been able to measure time with any degree of precision.

In the history of clocks, sundials were among the first varieties. As early as 3,500 BC, the ancient Egyptians began using obelisks to measure the shadow cast by the sun. They invented water clocks, which were also used in Babylon, ancient Greece, Persia, Mesopotamia, India, and ancient China, to name a few civilizations.

Aside from the time stick, which was used in India, Tibet, and Persia, other kinds of clocks were used in ancient Japan, China, Mesopotamia, and England, among others.

The Birth Of The Mechanical Clock

When the ancient Greeks, Romans, and Chinese continued to improve the accuracy of their water clocks, they were able to produce the world’s first mechanical clocks. A geared water clock was created in Islamic Iberia in the 11th century, and it is thought that Islamic civilization took water clock design even further via the use of engineering.

A group of Christian monks in me Europe invented the world’s first completely mechanical clocks in the 14th century. They were erected in monasteries to help people keep track of their daily activities, including prayers.

A complex system of pulleys and weights was used to operate the striking mechanism on these early clocks. When they were put up, they made timekeeping more public than it had been before. They were put up in places like churches and town halls.

What Is An Antique Farmhouse Clock?

From what I’ve learned, it’s possible that nostalgia for the talents of skilled craftsmen or the beauty of humanity has classified them in the antique watch segment. An item that goes through the ups and downs of history, war, bombs, immigrants … These are important factors for evaluating the ancient value of a watch.

The vintage farmhouse clock still has the beauty of the old clock. It’s still a testament to history, of human exuberance and talent. Besides, it also has its characteristics of farm and country style.

A rustic, ancient, and very farmhouse beauty. Antique farmhouse clocks are usually simpler, and less sophisticated in detail than some other types of antique clocks, but they are still very sophisticated.

These clocks are usually made from the main material of wood – the soul of the farm style. In addition, the top details of the clock are mostly Roman numerals and some symbols or images of that era.

Large antique farmhouse wall clocks were decorated in taverns, inns, assembly halls, and other public buildings in the early 18th century. They are meant to be read from a distance, with gilded numerals and wooden dials, sometimes in the shape of a shield.

In most cases, a cuckoo clock is a vintage farmhouse wall clock with a pendulum that strikes the hours with a sound that is similar to a common cuckoo cry. It also features an automatic cuckoo bird that moves with each note struck.

These antique farmhouse wall clocks are interactive statement pieces that genuinely bring a room to life with their chiming sounds. Typically, these timekeepers are ornamented with well-known forest animals as well as moving figures that come to life on the hour to tell the time.

As this antique farmhouse clock ticks away the minutes and seconds, its rotating gears rotate in a different direction. Getting this clock for the mechanic in your life would be a great idea. It’s a good antique farmhouse wall clock to keep track of time on a workbench.

Do you have a penchant for antiques? You may like this design with birds and leaves.

It is a wonderful idea to put this antique farmhouse wall clock in an octagonal wooden frame that has been handcrafted with thread woven into it.

The grandfather’s neck clock, sometimes known as a tunic watch, is tall, free-faced, and powered by a pendulum. They may be traced back to 1660, and have bronze square clock faces, walnut grains, and peaks that frequently bear family crests (take a look at our old grandfather watches sold for a better idea).

The ridge embellishments of birds, flowers, or geometric patterns on Ao dai watches from this era are generally recognizable – Japan is also highly popular.

Wristwatches for sale may date back to the mid-17th century when pendulums were created and spring-motion devices were first designed. They are known as frame antique farmhouse clocks (though they are often known as desktop watches or odometers). And include dials and case casings identical to their copies.

Carriage clocks are compact, portable, spring-controlled instruments with carrying handles that are popular among antique collectors. Developed as a journey watch by prominent French watchmaker Abraham-Louis Breguet (1747-1823). They are poetically known as a pendant in France and are extensively offered in the UK and the US.

Watchmakers have had a lot of fun producing unusual and exceptional timepieces throughout history, from musical functions to mechanical numerals. The majority of the unique antique farmhouse clocks are from the nineteenth century (mostly from France) and are very collectible owing to their interesting intricacy.

Mantel clocks, also known as shelf clocks, are tiny house clocks that are customarily placed on the shelf above the fireplace, known as the mantel. These timepieces are often extravagant, ornamental works of art.

The most common materials used to create them are ormolu, porcelain, and wood, in various combinations. Mantel clocks, which are both portable and functional, are a lovely way to round off the ensemble of bookshelves, tables, and, of course, mantels.

These antique farmhouse clocks, with their clean lines and geometric facades, are both visually beautiful and functional as a means of beautifying your house at the same time.

The mechanism by which an Atmos clock operates is astounding. It is powered by an ethyl chloride mixture (a mixture of gas and liquid) contained inside a capsule.
The mixture expands as the temperature increases. It contracts when the temperature drops. This causes the capsule to vibrate like a concertina, which keeps the clock’s mainspring moving.

Even a one-degree difference in temperature between 15 and 30 degrees Celsius is enough for the Amos clock to work for two days without a hitch. Everything within the Atmos clock must be in motion and operate as softly and smoothly as possible for the whole system to function in harmony.

Although the clock components are not very precise, they are almost wear-free. Atmos perpetual clocks are projected to operate for at least 600 years with appropriate care and handling.

However, because of the pollution levels in today’s world, it is vital to clean your Atmos clock at least once every 20 years. These antique farmhouse clocks are very valuable because they are rare and because they used to be very hard to find.

The term “skeleton clock” refers to any clock or wristwatch in which the parts that normally cover the inner workings of the mechanism have been removed or changed a lot to show these inner workings. This is true even if the clock or watch is mechanical.

The sections of the body that are most often represented by skeleton designs are those that have the greatest mobility or the most visually appealing design. There are many types of escapements, including but not limited to the escapement, balance wheel and balancing spring, mainspring, and tourbillon, among others.

Skeleton wristwatches have a back that is often made of sapphire crystal or similar transparent material that allows for simple viewing of the components protected inside the watch from both the front and the rear.

This antique farmhouse clock, which was made from an actual 1940s Double Wasp Radial Engine Piston, was originally a component of the American WWII aviation artillery’s arsenal. Each clock is made to order and comes with scars from previous fights and machine-gun pitting on the face.

This complicated monster, which has been hand-painted to seem like metal, might claim to be the most comprehensive collection of steampunk home décor.

With this diver’s helmet clock, you’ll be well prepared for your underwater excursions. Quartz is used to power the themed ticker on the screen.

Customers and overnight visitors will be perplexed by a phone that does not accurately display the time. Make a phone ringing sound to engage in some lighthearted conversation.

Those who like photography will love this antique farmhouse clock that also serves as a timepiece in your home décor.

This vintage rotary creation with walnut and brass accents is a treasure for collectors of antiques and antique-inspired furniture.

The gift of gilding may be given in the form of this desk clock that alludes to all things Victorian.

Convert your workplace into a grandstand as the time machine flicks between 1960s-era number panels.

This vintage farmhouse clock interestingly displays the current time. In these vintage tubes, you may choose between a time and a date display. It would be best suited to a location in the home library or office.

Browse valuable antique farmhouse clock ideas from Farmhouse Rooms to choose the design that most appeals to you. Then look for pieces comparable to your favorite design on the internet or in person at auctions, antique stores, or flea market sellers. No matter whatever design you want, think about how the clock will complement the surrounding environment and inspire your imagination.

Edwards Cedric Conrad
As a professional author at Farmhouse Rooms, Edwards has several years of experience as a SEO Content Writer who not only is well-versed in generating eloquent content for social media marketing and blogs via adhering to SEO requirements but also excels in using tools like Google Analytics and AdWords to optimize and update content in order to increase organic traffic, promote engagement, and boost overall user experience.
Share
Facebook
Twitter
Pinterest
WhatsApp

21 Easy Ways For Transitioning To Winter Decor After Christmas

Top 27 Remarkable Farmhouse Ceiling Ideas You Should Know in 2022