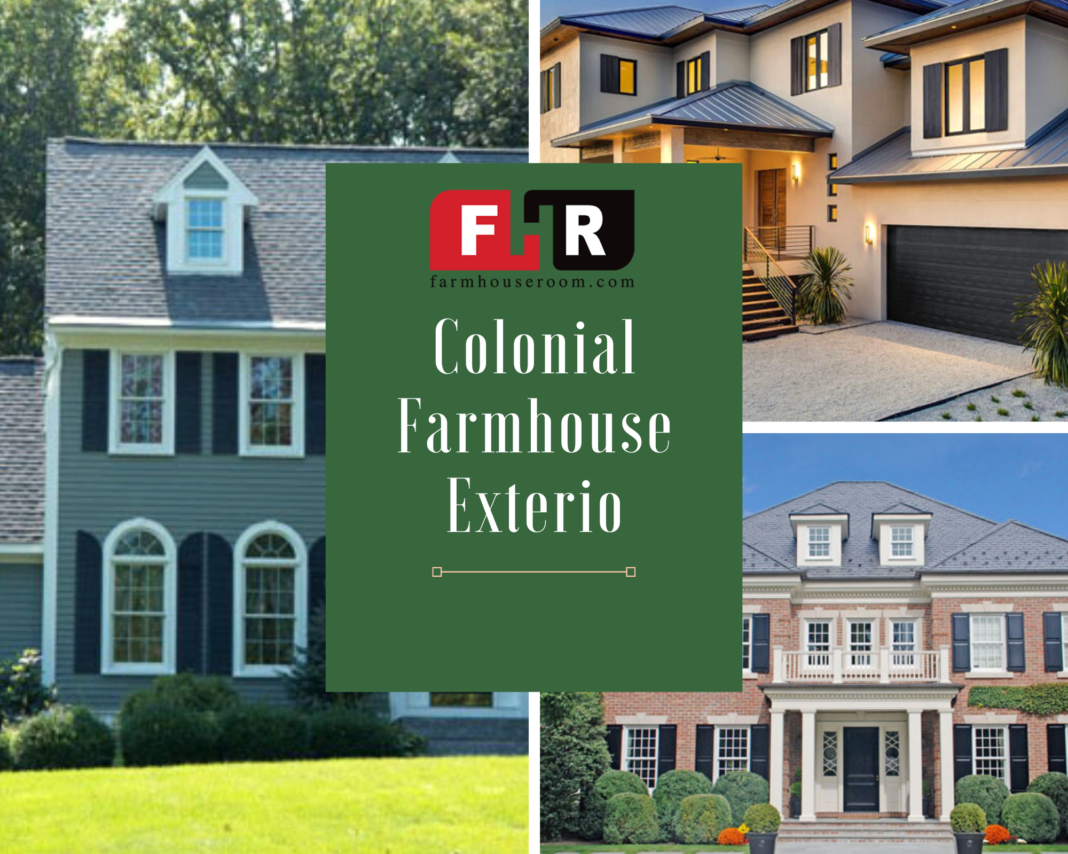 The colonial farmhouse exterior may be traced back to the United States Colonial Era. Though actual Colonial houses were no longer constructed after the American Revolution, its core design principles—simple, symmetrical, and at least two stories tall—have remained a prominent influence in domestic architecture for nearly 200 years.

The colonial farmhouse is constructed in a typical style of construction that goes back to the American colonial period. In general, they are rectangular in shape with gabled roofs, symmetrical windows, and neutral color schemes. They are meant to be comfortable for a family to live in.

The terrain of the early American colonies brought with it the building of colonial architecture. Fashions changed depending on who ruled the area. They were inspired by the ever-popular Georgian buildings, which were based on British colonial design. These buildings are still popular today. These were built with a nine-window grid and a front entrance on the exterior.

Generally made of wood, you may also see multiple chimneys and, in larger homes, a wing or two off the sides. Later residences have brick on the front and siding on the rear. Colonial homes, no matter what time period they were built, are very symmetrical because they are easy to build.

Traditional symmetry can be found in a lot of different styles, like French colonial farmhouse decor and Spanish Colonia.

A truly antique colonial farmhouse exterior will most likely be simple. The typical window grid runs across the front, and wood cladding wraps around the façade. However, colonial homes often have a pediment to keep them from being too formal. This is because of the Georgian and British colonial designs

While clapboard siding was most common in traditional Colonial construction, brick facades were sometimes seen. You may choose it for your American Colonial-style home. The brick pattern, with its simple form, adds intrigue that British Colonial architecture lacks.

You could stumble upon a historic Colonial house with a stone façade every now and again. You know you’ve struck the jackpot. Stone Colonials are difficult to come by. If you are able to acquire it, make every effort to maintain its historical integrity for future generations.

In the cold winters, a classic American Colonial design home would depend on fireplaces for heat and symmetry on the outside. Don’t be afraid to use brick columns as part of your plan.

Due to our current necessities, a modern colonial farmhouse exterior design is seldom as genuine as a genuine one. A garage wing off the side of the home is popular, but with comparable window types, it may fit in with the rest of the house.

Is your American Colonial-style house missing a wing on one side? Add another on the other side to achieve the coveted symmetry of colonial farmhouse decor architecture. You’ll also improve the appearance of your home’s outside.

You may not know how simple it is to transform Colonial architecture into a fake Georgian. The place flourishes around the corners, around the roof, and at the front entrance. For colonial-style homes, this is easily a veneer of grandeur and grace.

Don’t believe that the outside of a contemporary colonial farmhouse exterior has to be boring. Painting your exterior in a striking color such as dusty gray, blue, or even black may bring your house up to date with the rest of the neighborhood.

Even the smallest splash of color can completely transform a room. If you don’t have the money to paint your entire home, start with the front entrance. Unexpected hues like scarlet, turquoise, or purple will breathe fresh life into the outside of your American colonial farmhouse style.

Rather than sticking with a pristine white, off-whites will witness a revival in appeal in the canonical farmhouse exterior. The ideal whites to choose for your canonical exterior are creamy and warm tones.

Depending on your tastes, you may go with something brighter or darker. I recommend looking at off-whites rather than real whites. This might seem a little too chilly and clinical to make a family’s home feel warm and relaxed. Warm whites pair nicely with wood elements if you have them in your colonial farmhouse style.

Another neutral hue that has come into its own is beige. It may seem like an odd option, but it has a lot going for it. Beige, like the whites we discussed, is a warm hue that works well for any colonial farmhouse exterior painting project. However, it resists yellowing with time, so you won’t have to repaint it very soon.

While it might be difficult to obtain superb metallic paints, several firms have begun to provide amazing bronze hues. This is a stylish hue that will make people take a second look at your property.

Pairing this color with additional golden accents makes it even more appealing. Patio chairs and porch lighting are two of my recommendations.

Gray is a well-liked hue. Blue is as well. Slate blue is an excellent option since it blends all of those hues for a calm and neutral atmosphere.

Slate blue is an excellent option if you want to show off your individuality on your canonical farmhouse exterior. However, since it comes in a variety of colors, testing is essential. For the best effects, see the painting at various light levels.

13. Greens From The Ground

Green is a hue that works well for some canonical farmhouses but not so well for others, so I suggest having a depiction of what your home might look like before making a decision.

However, if you want a canonical farmhouse exterior paint color that is inspired by nature, earthy greens are a good choice. Even if you don’t use it as the dominant color, it may be used as an accent around the windows.

Pale gray is a nice alternative to beige or warm whites for homes. While dark gray isn’t as trendy as it once was, lighter grays look wonderful with green accents.

Some of these paints have warm undertones, while others have chilly undertones. Consider what works best for you on both bright and foggy days.

Navy, like slate, is another blue color that occurs in a variety of shades. Some may look predominantly blue, while others may appear more royal blue.

When it comes to painting the canonical farmhouse exterior, a neutral navy blue is typically the best choice. It looks great on anything from a midcentury contemporary house to a beach hut.

The Pilgrims were not the only settlers in Colonial America. Men and women came from all over the globe between 1600 and 1800, including Germany, France, Spain, and Latin America. Family members brought with them their cultures, customs, and architectural styles. The New World’s new residences were as different as the arriving populace.

The early British immigrants in New England constructed timber-frame houses identical to those they had seen in their homeland. New England’s physical qualities included wood and rock. The massive stone chimneys and diamond-pane windows seen on many of these structures have a medieval feel to them.

In fact, they are often referred to as Post-Medieval English. Because these buildings were made of wood, just a handful of them is still standing. Charming New England colonial farmhouse exterior elements are still integrated into modern-day Neocolonial residences.

This vernacular colonial style is shown by the 1753 Jacob Keim farmhouse in Oley, Pennsylvania. The original home was made of local limestone and had a red clay tiled roof, which was characteristic of the, or “beaver tail,” flat tile roofs of Bavaria in southern Germany.

Low, flat roofs were covered with earth, thatch, or red clay tiles. Pueblo Revival houses, which merge Hispanic design with Native American themes, may also be seen in California and the American Southwest.

Few original Spanish colonial residences survive, but excellent specimens have been kept or rebuilt at St. Augustine, Florida, the site of America’s first permanent European colony. The González–Alvarez House claims to be the oldest Spanish old colonial farmhouse in the city. It was built in the 1600s.

Dutch immigrants, like German colonists, carried with them construction customs from their homeland. They mostly settled in New York State, where they erected brick and stone buildings with rooflines reminiscent of the Dutch style.

The gambrel roof is a trademark of Dutch Colonial architecture. In the 20th century, the Dutch colonial farmhouse exterior became a popular revival design, and rounder roofs were common in homes built in the 20th century.

A Cape Cod home is a form of New England colonial house. Cape Cod homes, named after the peninsula where the Pilgrims first landed, are one-story structures built to survive the cold and snow of the New World.

The dwellings are as simple, basic, and functional as their inhabitants. Centuries later, builders adopted the practical, cost-effective Cape Cod design for low-cost housing in America’s suburbs.

Even today, its no-nonsense aesthetic evokes coziness and comfort. Although not all Cape Cod-style residences are from the colonial period, the famous design is part of America’s historic fabric.

With materials taken from the Blackstone River in northern Rhode Island, colonists started erecting homes similar to those found in western England. Because just one end of the building was built of stone—a stone extension of a large chimney—this kind of structure became known as the “Stone Ender.”

A Georgian mansion, named after English rulers, is tall and rectangular, with an ordered row of windows symmetrically set on the second floor. In the late 1800s and early 1900s, many Colonial Revival mansions looked like they were from the royal Georgian style.

While the English, Germans, and Dutch were establishing a new country along North America’s eastern borders, French immigrants arrived in the Mississippi Valley, particularly in Louisiana.

The architecture of French colonial dwellings is an eclectic blend of European ideas and techniques gained from Africa, the Caribbean, and the West Indies. Traditional French colonial farmhouse exterior dwellings are built on piers and designed for the hot, swampy climate. The internal chambers are linked by wide, open porches known as galleries.

The conclusion of the old colonial farmhouse period in the newly constituted United States is marked by Federalist architecture. Americans want to construct residences and government structures that reflect their new country’s values while also conveying beauty and affluence.

Borrowing Neoclassical ideas from the Adam brothers, a Scottish family of designers, wealthy landowners built finer versions of the austere Georgian colonial architecture. Porticoes, balustrades, fanlights, and other ornaments were added to these Federal or Adam-style residences.

Above are all 24 wonderful colonial farmhouse exterior design ideas that Farmhouse Rooms has brought to you. I hope to have brought the best ideas for you to refer to and upgrade your home. If you have any topics you want us to explore or have any questions, don’t stop contacting us.

Patrick Brooklyn
Patrick is a professional author at Farmhouse Rooms. He is a student at the University of Economics, majoring in e-commerce. So he has a lot of experience as an SEO material writer, which means he knows how to write SEO-friendly content for social media and blogs. He also knows how to use tools like Google Analytics, AdWords, and Keywordtool to make content more appealing, get more traffic, and improve the user experience.
Share
Facebook
Twitter
Pinterest
WhatsApp

21 Easy Ways For Transitioning To Winter Decor After Christmas

27 Wonderful Farmhouse Exterior Ideas To Inspire You In 2022