Farmhouse Rooms makes easy for you to decorate your rooms 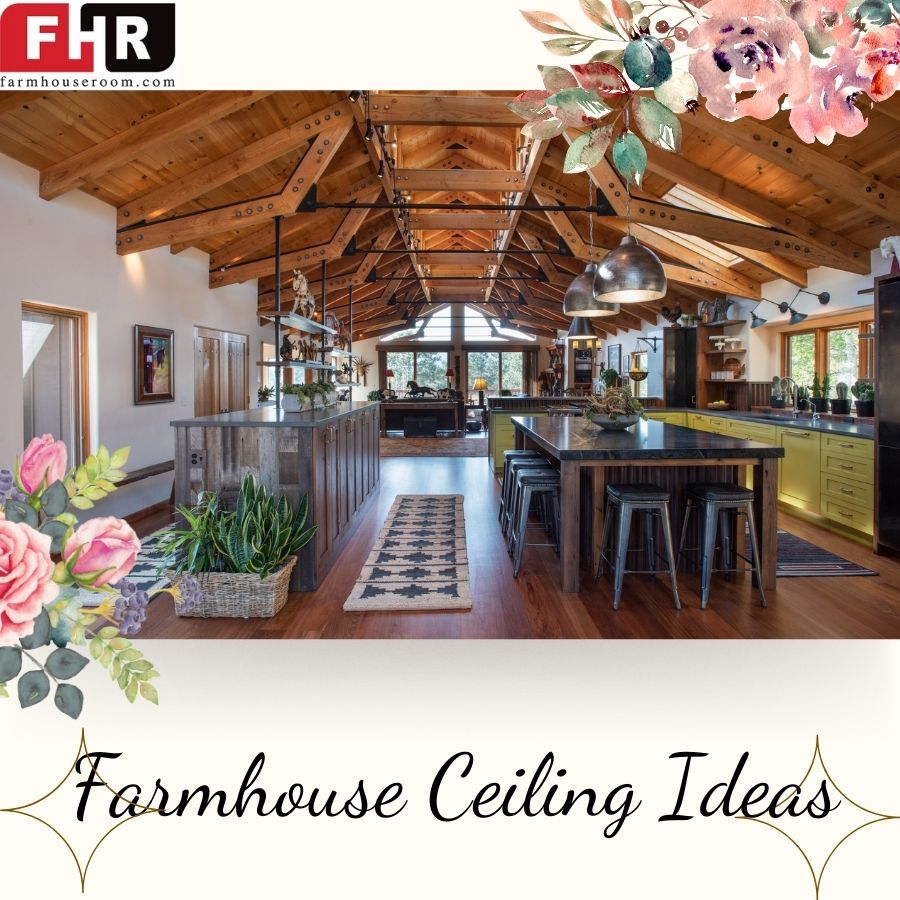 If you plan to design in a farmhouse style, do not ignore decorating the ceiling. Think about the restful time when you lay down to relax and see the fantastic top of the house. Like a house’s spirit, it attracts and enchants people. So, we bring brilliant farmhouse ceiling ideas that interest everyone that you’ll love. Let’s check with Farmhouse Rooms!

In many homes today, wooden beams are added to the ceiling. So, these high ceilings make your room feel larger. Besides, the greater the gap between the beams, the smaller your home will seem. So, adding more beams on top is a smart way to make a room feel bigger.

We know that there has been a question appearing in your mind up to now: how to put more beams with large gaps in a small room? The point is the size of the beam. If your room is small, let’s get the tiniest size.

Farmhouse ceiling ideas also go for a classic look with a more modern feel instead of a design that is only rustic. So, the wood is often painted instead of being left as is.

You can put hardwood on the ceiling, just like you can on the floor. Since wood is a part of the farmhouse style, your room’s cozy and modern vibes come from the wood ceiling.

You can give a room a unique, rustic feel by installing wood flooring on the ceiling instead of the floor. This puts the room in a place where it pushes the limits of the style of decor.

One of the most interesting ceiling ideas is to put a crystal chandelier and a wood ceiling next to each other. This creates a beautiful contrast that makes it hard to look away from.

Putting old wood planks on the ceiling of a foyer is one of the best farmhouse ceiling ideas. Because it helps divide the space and gives it a nice, rustic look.

When you add wood planks in a variety of deep tones to a bedroom, it makes the room feel cozy, warm, and personal.

It’s easy to change the look of your ceiling by putting up wallpaper. These farmhouse ceiling ideas work best with neutral colors and a simple look.
Also, putting wallpaper on the ceiling of a dining room gives people something to look at while they eat. Besides, the room feels sophisticated and has depth because of the bold design.

Few things are as traditional for a farmhouse as adding a bit of that gingham pattern. Putting this wallpaper on the ceiling of a bedroom is a quick way to give it a warm and rustic look.

7 Ideal Traditional Brick And Stone Ceiling Materials For A Farmhouse

This ceiling looks like the roofs of mosques. It looks like an arched dome with a round, curving frame where the ceiling meets the wall. By getting rid of the usual 90-degree angles, this style gives the ceiling a smooth, rounded look.

One of the most detailed farmhouse ceiling ideas is to put in a drop-down grid ceiling. This gives the room an air of architectural sophistication. Also, it makes the space cozier and draws the eye up.

By putting up a white ceiling in the shape of a grid, you can quickly make a room look more modern, open, and bright.

Using a stencil to put a striking design on a recessed ceiling is the height of luxury and decadence.

Putting a bunch of old panels on the ceiling can turn a room into something unusual and one-of-a-kind. It draws the eye up so that the person can look at it and appreciate how close it makes them feel.

One of the most popular farmhouse ceiling ideas today might be to paint the ceiling. This makes the room feel cozy and well-balanced.

Using natural and earthy accents is an easy way to warm up a modern living room. Also, they look great in places with arches or curves. When you put bricks or stones on your cottage ceiling, choose a color that goes well with the rest of the furniture.
To make a room feel warmer, use wood for furniture and accents, and put brick or stone on the ceiling. You can also give yourself an interesting look by making patterns out of fabric.

This ceiling is a recess of a rectangular architectural element that can be small or grand. Lighting is often an important part of this ceiling. It makes a flat ceiling more interesting by breaking up the straight line.

Stretch ceilings are becoming more and more popular. When you put a shiny stretch film on a ceiling, it reflects what is going on below. This gives the area a three-dimensional look that is hard to copy.

When a piece of the ceiling is lowered, it makes the room seem smaller and more intimate. When you add more lights and a stretch film to a room, it immediately feels more dramatic.

When a piece of the ceiling falls, the room gets a little more interesting. Adding wood and lights to the drop-down section makes it as interesting as possible.

The modern coffered ceiling takes on an almost ancient interior design element. It is both elegant and simple at the same time. So, these coffered farmhouse ceiling ideas work very well in a modern farmhouse.

Don’t be afraid to include pipes and other things that hang from the ceiling. Just spray them all with cool-toned paint that looks good on your ceiling, and you’re done!

You have a great industrial exposed ceiling that looks good in almost any room. You can also put a wooden ceiling on an open ceiling if you have enough wood planks, slats, and beams. This will give the room a cozy, rustic look.

Glass ceilings have been linked to old buildings for a long time. But they are a popular design feature that has many benefits for the house and its owner. First, everyone wants light from the outside. They are important for both our physical and mental health.

Installing glass windows in the ceiling brightens the space and saves energy. They also make the house look very nice, which makes it worth a lot more.
Above all, a glass ceiling gives you a lot of room to move around. For example, you could hang colorful glass pieces from the ceiling as art. When glass windows are next to raised wooden panels, the warmth of each material stands out. It also makes the space feel more modern and pleasant.
See more: Farmhouse Coffee And Tea Room Design: 13 Best Ideas To Learn

One of the most common farmhouse ceiling ideas is to hang a delicate fan. Today, a ceiling fan can be more than just a fan. It can also be paired with beautiful lights and controlled by a remote. Also, it doesn’t take up as much space as a regular fan or air conditioner. Because of these great benefits, ceiling fans will always be in style.

There have been ceiling lights for a long time. Different types of ceiling lights are made for different rooms. Since the farmhouse style is both modern and old-fashioned, it is easy to choose an LED light or a hanging light. A farmhouse ceiling with rustic light is one of the best ways to make an impression on the whole room.

Pom poms hanging from the ceiling give a room a sense of playfulness and whimsy that not much else can.

This is a simple idea that, when put into action, will give your ceiling a hip and trendy industrial look. Just take your steel sheets and cover the ceiling with them, no matter if they are new or old.

Putting real plants on a ladder that is hung from the ceiling gives the room a more country feel. Also, decorating in this way shows a lot of creativity and originality.

The ceiling is like a blank canvas and can be used in many ways to improve interior design. The design of the ceiling should match the style of room you want to make. The design of a farmhouse ceiling must be both practical and elegant.
By putting recessed lighting in a drop ceiling, you can make it look more modern. This could go in the middle of the room or on either side. Textures can also be used to make ceilings look like they belong in a farmhouse.

Changing a room’s bones has a bigger effect on how it feels than adding throw pillows or a new color of paint. People who want to change and improve a place shouldn’t forget about the ceiling. If you want to make a room more “wow,” use these 27 farmhouse ceiling ideas. They are from the Farmhouse Rooms that were listed above as a starting point and guide.

How To Hang A Canvas Painting: 3 Simple Step-By-Step Guides

22 Terrific Farmhouse Style Desk Ideas For Your Home In 2022